Hi, I am a student currently working on a BCI project. I am using a BrainMaster Discovery 24E amplifier and used OpenVIBE as an acquisition server for online processing of my BCI experimental set up. However for offline processing I have switched to BCILAB. I earlier tried to work with EEGLAB but it has limited tools for processing of BCI experimental data (ERD/ERS quantification). I was able to export EDF file saved from OpenVIBE to EEGLAB however I am not sure it reads the exact channel location as provided by the amplifier company (BrainMaster) as EEGLAB can read EDF format of Biosemi by default. However when I export same EDF file to BCILAB, for Offline processing (e.g. log-bandpower method) it does not work and give me following errors: 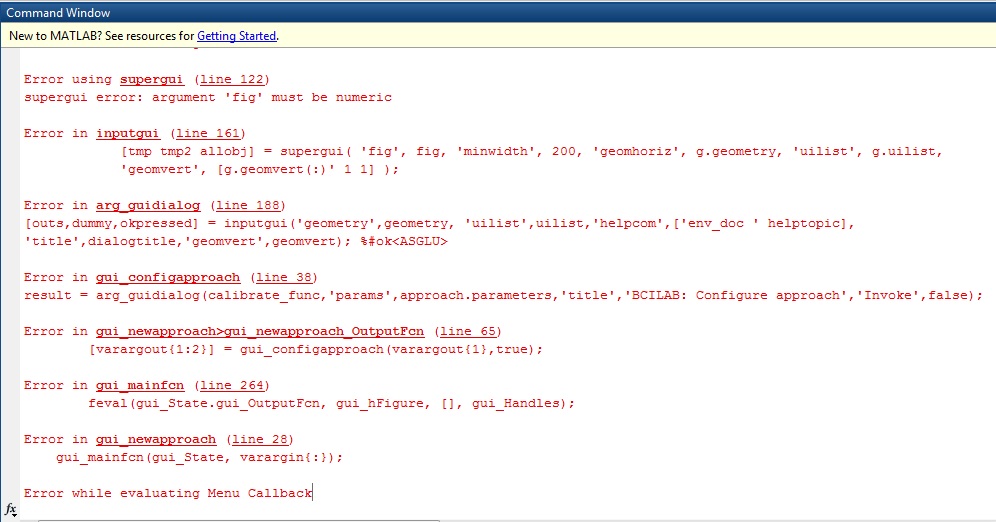 Also to let you know the sample files under the folder 'Tutorial' in BCILAB zipped folder also does not work with BCILAB. I do not know is there any installation error or what. At least the offline processing on given sample data should have worked. Kindly help me out with this. I have wasted so many days finding solution to it but all in vain.
Top

Re: Want to export EDF file saved from OpenVIBE to EEGLAB

By channel locations, you mean the channel names? The names should be passable via the usual file formats. Electrode coordinates however might not be handled (and I'm surprised if some driver gives them out).

For issues specific to BCILAB, you could consider asking closer to that community -- although many people here probably use bcilab or eeglab now and then, this is primarily the openvibe forum.

Nevertheless, I've had success in the past getting data into bcilab from openvibe using the GDF format as a middleman. Basically, you use openvibe-convert to turn .ov files into .gdf files. After that, you can do the follows in Matlab with BCILAB already launched once,

The result should be a file pair generally understood by EEGLAB (and BCILAB). Those load/save functions afaik come from bcilab. If it needs a gdf importer installed separately (I don't remember), it was available somewhere through the eeglab plugin webpage.

Return to “Help for building the software”